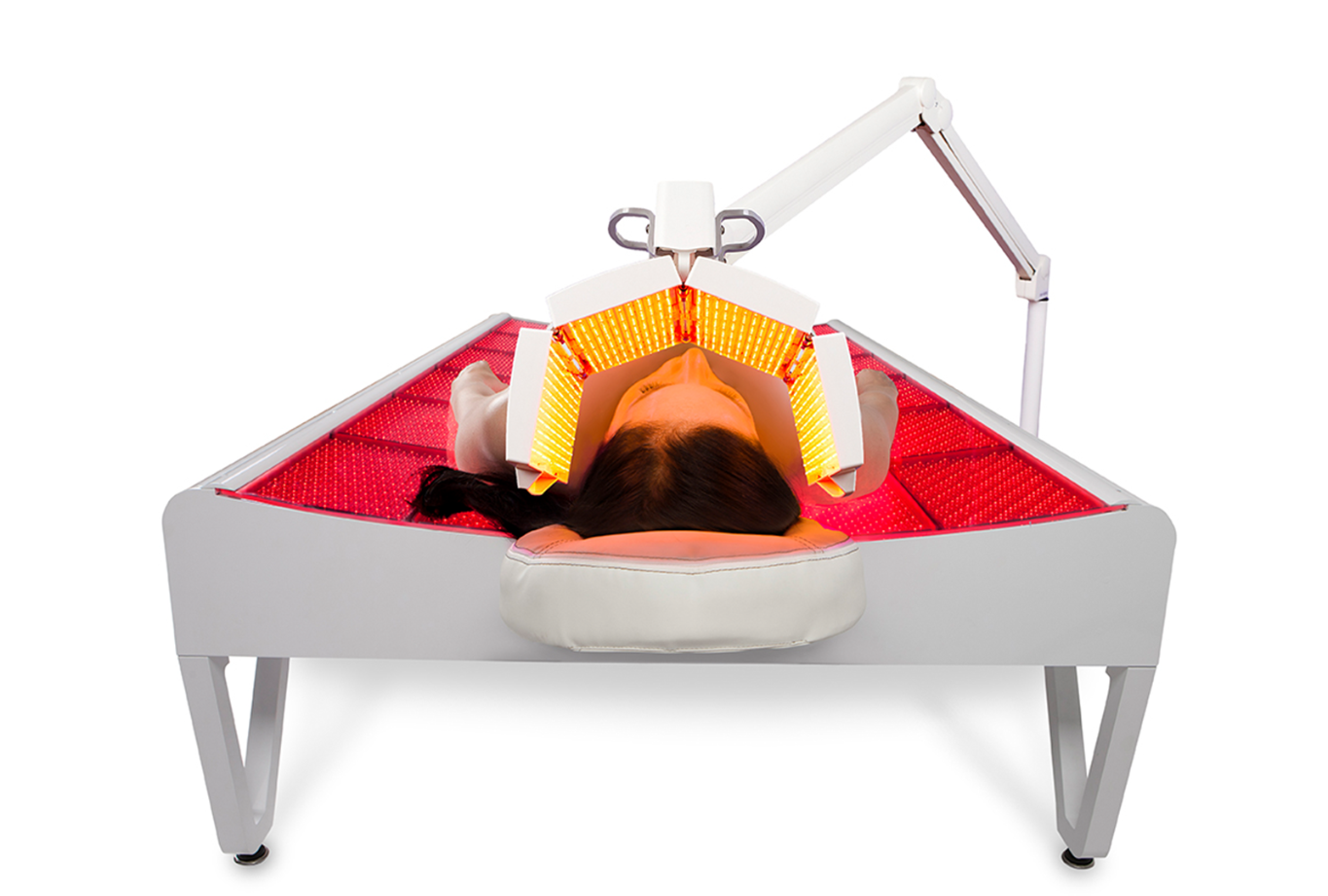 Our red light therapy treatments are delivered via a device called the LightStim® LED bed. The bed houses 18,240 therapeutic, glowing LED lights, which utilize red (630 and 660 nm) and infrared light wavelengths (885 and 940 nm).This is the first bed of its kind to be FDA-cleared for therapeutic use. The LightStim® LED bed can be combined with many of our other innovative therapies for aesthetics, anti-aging, healing and overall wellness.The amount of time one spends on the bed is variable. A typical treatment is about twenty minutes to an hour. The main light source in the LightStim® bed is visible red light. This is a cool light and does not generate much heat. The 4 Main Health Benefits of Red Light Therapy: Photoreceptor activation: Red light interacts with photoreceptors in the body like cytochrome c oxidase within the mitochondria to stimulate energy production and give an electrical charge to water. Red light absorption converts light energy into signals that can stimulate biological processes. Water is the number one red/infrared light chromophore in the human body absorbing a great deal of the light and using it to function as a biologic battery. The “battery” is charged by hydrogen ions. Hormesis (hormetic stress): Hormetic stress is the ideal level of exposure to stressors. Underexposure to stress could leave your body unchallenged, while overexposure could lead to health problems. Hormetic stress is that “sweet spot” where stress could be beneficial. Red/IR light creates beneficial reactive oxygen species (ROS) on a transient basis. The hormesis effect stimulates the mitochondria to make adaptations to allow the cell to become stronger and more resistant to a broader range of stresses by activating the cells internal response system to boost antioxidant production. This not only boosts antioxidant production but allows the cell to have an increased ability to reduce toxic compounds. Ultimately, this activates mitochondrial biogenesis creating a greater number of mitochondria. Mitochondrial Signaling: Red and infrared light therapy stimulates the mitochondria to communicate with the cell nucleus to upregulate gene expression. The genes then produce compound, which are involved in mitochondrial biogenesis, antioxidant defenses and detoxification. Photosensitizers: We are aware that certain compounds have unique properties in that they can be activated by light therapy. Photosensitizers are substances that make your cells or tissues more sensitive to light. While low-dose methylene blue and low-level near-infrared light may produce different cellular effects, both interventions cause a similar up-regulation of mitochondrial respiration with similar benefits to protect nerve cells against degeneration. The bottom line is that the methylene blue used in conjunction with the red-light therapy can help increase ATP production. Curcumin is another photosensitizer compound.
Read more 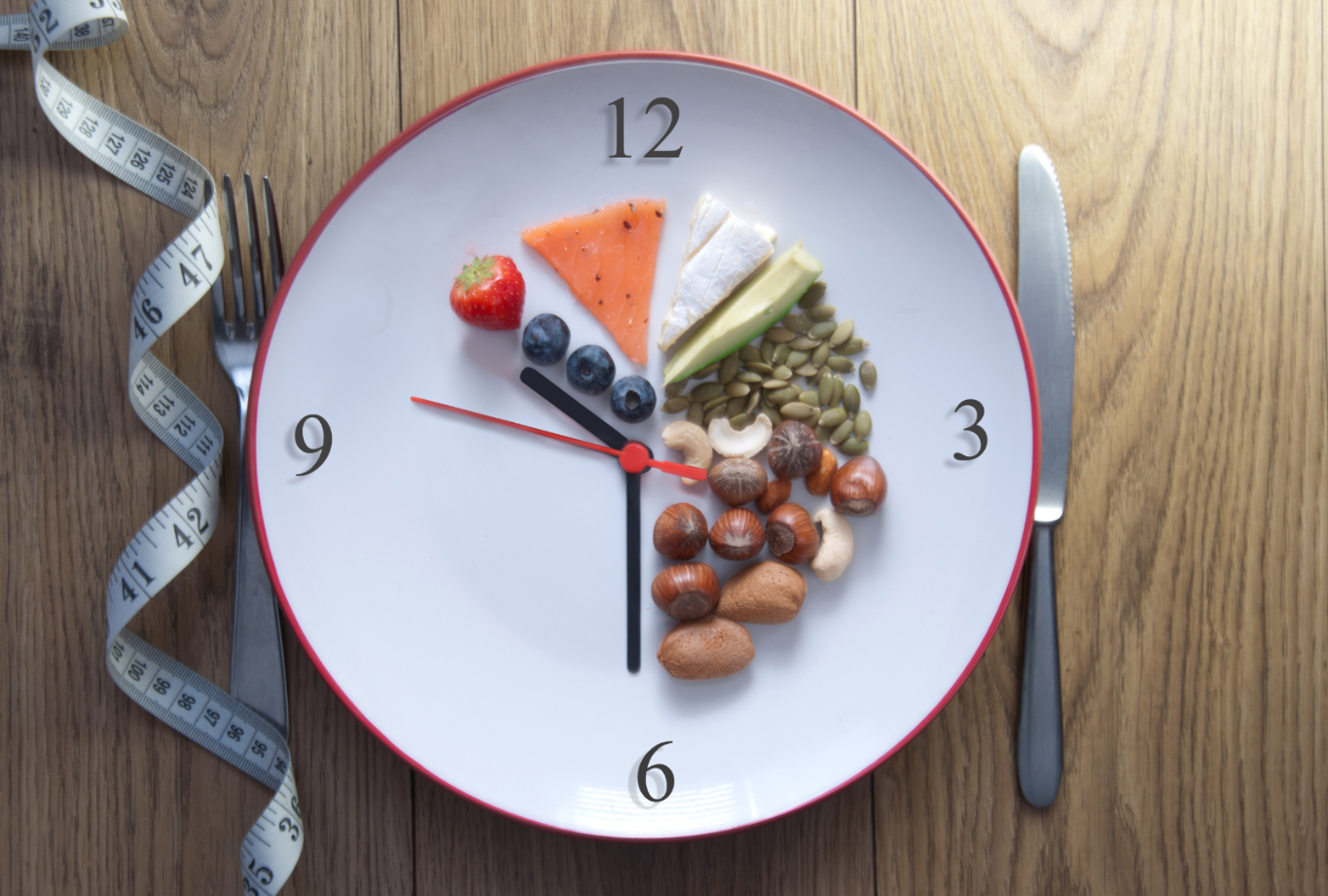 In my research over the last year, I have come across more and more articles discussing the value and importance of prolonged and intermittent fasting as it relates to regenerative medicine. While studies on intermittent fasting, or IF, as it’s known in shorthand, are published in scientific journals, the results and the benefits are steadily making their way into the mainstream. I recently read an article in Longevity.Technology that compared prolonged fasting with IF that piqued my interest and I wanted to share some of the finer points with you. ONE: How does fasting work? In the simplest form, fasting works by activating a process called ketosis. Ketosis occurs when you haven’t eaten for an extended period of time and your body doesn't have enough carbohydrates to burn for energy. Instead, it burns fat and produces ketones, which it can use for fuel. This is called being in “ketosis”. TWO: What is the difference between IF and prolonged fasting? Prolonged fasting occurs when you choose to not eat for a long period of time; anywhere from 24 to 48 to 72 hours. You consume water and occasionally some nutrients during this time, but little to no calories. As you can imagine, this strategy of fasting is too difficult for many people to attempt or maintain. Thankfully, practicing IF allows you to obtain many of the benefits of prolonged fasting with a much more manageable eating schedule. The sweet spots for these IF regiments is typically between 18 and 24 hours, which is why the 16-hour fast followed by an 8-hour eating window is so popular. Many who follow this schedule begin their fast at 8pm and don’t eat until the following day at 12pm. During that eating window starting at 12pm, people practicing IF eat all of their meals for the day. You may feel like you can loosen up on your diet since you just fasted, but I would not recommend that. I’d still limit or ban sugars altogether and cut carbohydrates down to a bare minimum. THREE: Does fasting affect longevity? Whether you choose to try IF or prolonged fasting, both methods affect nutrient sensing pathways. One such pathway is called the AMPK pathway which helps drive glucose into the cells and thus decreases glucose levels. Stimulation of the AMPK pathway definitely is associated with longevity. At the same time, fasting also down-regulates the mTOR pathway. FOUR: What are the other benefits of IF? One very important aspect of intermittent fasting involves the process of autophagy. Just as important as the weight loss aspects of IF, autophagy has tremendous health benefits as well. Autophagy plays a housekeeping role in removing improperly folded or aggregated proteins, clearing damaged organelles (intracellular structures), such as mitochondria and endoplasmic reticulum, both of which are important in energy production. In addition to the elimination of intracellular aggregates and damaged organelles, autophagy promotes cellular senescence and cell surface antigen presentation, which protects against genome instability and prevents necrosis. Taking things one step further, autophagy plays a key role in preventing diseases such as cancer, neurodegeneration, cardiomyopathy, diabetes, liver disease, autoimmune diseases and infections. In conclusion, IF may provide a host of health benefits and for many people it is certainly worth practicing. - Dr. P This is the recent article that I found valuable: https://longevity.technology/lifestyle/intermittent-vs-prolonged-fasting-which-is-better-for-weight-loss/
Read more

Everything You Need to Know to Start Intermittent Fasting

by Jon Finkel
For good reason, Intermittent Fasting (IF) is one of the most talked about health trends of the moment. Previously, calorie restriction was thought to be one of the best ways to reverse the clock of aging, but intermittent fasting could be even better! Intermittent fasting is typically restricting your eating hours to 8 hours per day and your fasting hours to 16 hours per day. During the fast, it is preferable to drink lots of water and even drink a bit of black coffee if you enjoy your morning jolt! There are many different structures to an intermittent fasting regimen, and it can be tailored to any lifestyle. There are a ton of benefits that come with a 16 hour fast, but our top 5 are: ● Weight and fat loss! ● Helps decrease cholesterol. ● Helps prevent type 2 diabetes. ● Helps to improve blood pressure! ● A recent Harvard study showed that IF helped in preventing disease and promoting overall health!
Read more

What is EBO2? The Top 3 Benefits

by Bella Sannasardo, RN
Extracorporeal blood oxygenation + ozonation is a protocol that begins with the placement of two IV catheters. One of these catheters is used to pull blood out of the body, run it through a dialysis filter, the blood then gets ozonated and infused into the other catheter in the other arm. As the blood comes out it is typically a dark color, but after it is filtered and ozonated, it becomes a clean bright red color! The top 3 benefits of EBO2 are as follows: Decreases inflammation. ○ EBO2 stimulates a pathway in the body that dramatically decreases inflammation and even continues to loosen up the inflammation hiding away in the tissues for some time after the protocol! This inflammation can even be seen as foam in the waste container. Yes, you'll be able to see the inflammation leaving your body! This makes the protocol excellent for anyone with an autoimmune disease. Lowers cholesterol & fat in blood. ○ As the blood comes out of the body, many times you'll be able to see the yellow globs of fat leaving the body. These get trapped in the filter and leave your body for good! Triglycerides and Cholesterol levels can be lowered significantly with a number of treatments. Kills Virus, Bacteria, & fungi. ○ Ozone has amazing antibacterial, antiviral and anti-fungal properties. To take this a step further, we use an Ultraviolet light to further impose its antimicrobial effect. This makes the protocol excellent for patients suffering with Lyme disease and mold exposure.Learn more about EBO2 here. Thanks,Nurse Bella
Read more

Our New Weapon: A State-Of-The-Art Class IV Cold Laser, Like Nothing You Have Seen

by Dr. Joseph Purita
This is an especially fascinating study as far as aging is concerned. I left the article link at the end of my write up. What this study looked at was the ability of long-lived people to repair DNA damage. In this particular case they looked at inherited and naturally occurring genetic changes in older people. They found in the long-lived population two particular genes COA1 and STK17A. These are rather esoteric names but the importance is there! COA1 is involved with energy production and communication between the mitochondria and the cell nucleus. COA1 performed three functions that are part of the blue prints for anti-aging platforms. They directed cell response to DNA damage, they prompted badly damaged cells to die off, and controlled the amounts of Reactive Oxygen Species. I suspect these genes are stimulating the P-53 gene. P -53 is called the tumor suppressor gene. Taking things one step further, remember that NAD+ is a substrate for DNA repair proteins such as PARP1, PARP2 and PARP3 as well as enzymes that can influence DNA repair capacity such as SIRT1 and SIRT6. The PARP enzymes typically get shut off when the body does not have enough NAD+ to go around. Looks like there may be some overlap here. Activate the DNA repair genes and you may live longer. At least you are giving yourself better odds. This is why I feel it is of paramount importance to take NAD supplements both orally and intravenously. Also remember, there is much science out there that shows Ozone therapy can increase the NAD levels in the body in addition to dramatically decreasing damage from Reactive Oxygen Species. The moral of the story here is: MAKE SURE YOU TAKE YOUR NAD TO STAY YOUNG.Here is the article I am talking about:https://bigthink.com/surprising-science/semi-supercentenarians-dna-repairThanks,Dr. P
Read more

Mitochondria: Weathervane of Health For The Body & Stem Cells